Of all the games I thought to buy when I got a Switch, Mario + Rabbids: Kingdom Battle was not one that came to mind. Even ignoring the WiiU ports, which as one of the few owners of the WiiU I had already played most of them, there were still quite a few games to get me started. The new Pokemon, Super Mario Odyssey, and Fire Emblem Three Houses just for a start. But those games are still full price, while I was able to get Mario + Rabbids for song. I like Mario and I like strategy games, so I thought I’d give it a try. 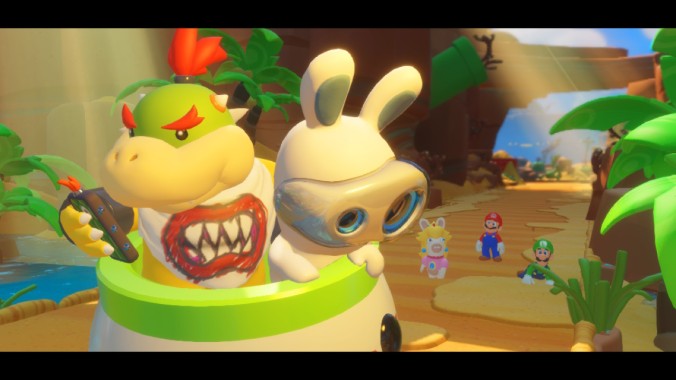 Mario + Rabbids is a strange game. I mean, from conception it is odd. There is not a lot of overlap in sensibility between the Mario games and the Rabbids. Mario is Mario. The Raving Rabbids were kind of a proto-Minions that spun out of the Rayman series all the way back in the early days of the Wii/fading days of the PS2. They starred in a series of chaotic mini-game collections, starting something of a craze that lasted for a while, but by the time of the Switch launch they had largely been banished to mobile for half a decade. Still, it wasn’t much of a surprise to see Ubisoft try to resurrect them with a new game for a new system. I think its says a lot about where Nintendo was after the failure of the WiiU that Ubisoft was given the keys to Mario Kingdom to help relaunch these characters.

On top of the weirdness of mixing the two franchises is the genre of game that Mario + Rabbids is. It is not a reflection of either Mario or the Rabbids, both of whom at their hearts come from platformers. Mario is known for showing up in absolutely anything; he’s been in sports games, racing games, rpgs, you name it. The Rabbids have mostly been in party games and mini-game collections. So, of course, Ubisoft went with a strategy game. And while it never stops being weird, it mostly works. 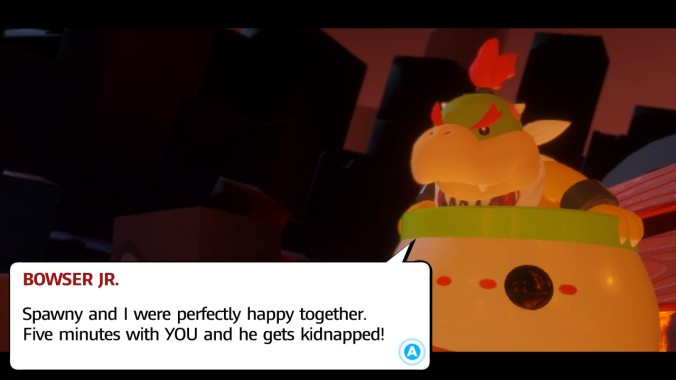 The game has got a good mix of characters with some real tactical choices to make once you get a full party. The game eventually gives you the central Mario crew: Mario, Luigi, Peach, and Yoshi. They are joined by Rabbids versions of each of the four. You start with just Mario, Rabbid Peach and Rabbid Luigi, and the others join one or two per chapter. Each version of each four characters fill similar roles, but each of the eight characters is pretty different. Mario is forced on the player for every battle, but fortunately he is good enough that you will likely want to use anyway. He is the all around character. The others have more specialized roles. Rabbid Peach has an actual healing ability; regular Peach has a defensive boost, a shotgun and a healing ability tied to her jump ability. Rabbid Luigi is a pure support character, great at weakening and giving status effects to enemies. Regular Luigi is the team’s sniper. Every character has maps where they shine, where their skills are absolutely essential.

For the most part the game works. Where I thought it kind of fell flat was how it tried to integrate Mario’s platformer roots into the tactical battles. Each character can move a certain number of squares on the grid map, but instead of actually being able to only move, for instance, 6 squares, the game gives a character a range of 6 squares. This makes for some weird choices with the available movement attacks. Each character can perform at least one run by melee attack per turn, but since your movement is based on range, your best choice is generally to run around bumping into every enemy near you before settling in where you want to shoot from. Then there are the warp pipes; these reset a character’s range to a specified number of squares, for some characters nearly the same as their initial movement range. In maps with a lot of pipes, some characters can pretty much go anywhere. It makes things very unpredictable if you don’t know exactly how far enemies can move, both pre and post pipe.

Also kind of awkward and unsatisfying are the parts in between battles where you find chests and solve simplistic puzzles. They feel vaguely in the Mario vein, but mostly end up feeling like padding. I guess there needed to be some connective tissue between stages but these puzzles mostly feel like they are just taking up your time.  It does nail the tone of the Mario series. I am far from an expert when it comes to the Rabbids, but the Mario characters feel about like they would in a Nintendo developed game. I would say I can’t imagine seeing Mario wielding a gun in a Nintendo game, but Smash Bros exists. Mario is the can-do hero, Peach alternates between being sidelined and wanting to get in on the action. There are various goofy Toads. Luigi is the weird schlub also-ran to Mario. Bowser doesn’t make an appearance until late, but he is on brand and honestly this is about as enjoyable as Bowser Jr. has ever been. The highlight is the opera ghost boss, who opens with a song. 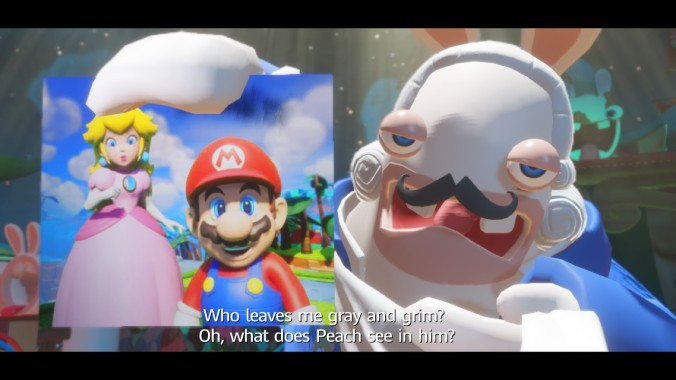 Mario + Rabbids is just a strange enjoyable little game. Its creation reeks of desperation on both companies behind it, but the result is a good time.

One thought on “Mario + Rabbids”