It is time for more Video Game Archaeology! Video Game Archaeology is my monthly exploration of an artifact video game found during my excavations of various bargain bins and yard sales; an examination of a game cast off and long forgotten. Featured this month is the Nintendo 64 game Rocket: Robot on Wheels.

Rocket: Robot on Wheels is the story of a robot that must save his owners theme park by defeating the devious raccoon mascot (actually mascot’s sidekick) and retrieving all of the tickets he had stolen. Yes, Rocket is that specialty of the N64: the collect-a-thon platformer. Here is have to be completely honest, while I recognize that that they are wholly out of favor I never really soured on collect-a-thons. I don’t necessarily love all the games in the genre, but I still like many of them. I played Banjo-Kazooie in the last year and still loved it. And I really liked Rocket as well.

A collect-a-thon, for those to whom God was merciful and were spared the eye-searing N64/PS1 days, is a game that focuses primarily on collecting various doodads and baubles. In older games, the goal was usually to reach the end of a stage or to defeat a boss, but in a collect-a-thon the levels are generally large playgrounds and the goal is to find all the crap hidden in a level. While you can trace the roots of this nonsense back to the 16-bit era (see: all the crap to collect in DC2), collect-a-thons really got their start with Mario 64. 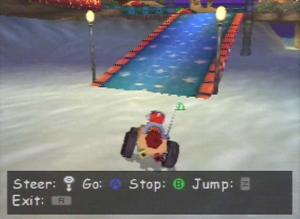 Mario 64 set the tone for N64 platformers. Instead of linear levels like the 2D games, Mario 64 gives the player large, relatively open levels with 5 or so stars to find in each of them. Other than coins, that is all there really is to collect. Other developers saw Mario 64 and thought, “if kids like collecting stars so much we’ll give them 500 things to collect.” Then they did so.

Pocket is a perfect example of the collect-a-thon. In each of the 8 stages, which are somewhat cleverly attractions at an actual theme park, the player must collect 15 tickets. While most of the tickets are cleverly hidden or earned from completing actual tasks, there are at least 2 in each stage that you receive as rewards for collecting other things. In each stage, there are 200 gears, which are used to upgrade some of Rocket’s skills but mostly just there, so one of the tickets can be a reward for finding all 200. Also in each stage is a machine that must be repaired. To repair it you need to find the 6 pieces of it scattered about the stage. Doing so opens up some previously unavailable sections of the stage and nets you the immediate reward of a ticket. The extra collectables are mostly unnecessary. They pad a game that is already plenty long and is otherwise really fun.

Collect-a-thons do not hinge on the collecting but on the obstacles between the player and the doodad. In this area, Rocket is quite good. While not all the challenges are particularly fun, one that is not is an annoying dolphin ride, most of them are well done. At least through the first 3 or 4 stages, which is all the further I got. Rocket’s most effective tool is his electric tether. It is used, thanks to his stylish lack of arms, to grab and throw objects. It is also used as a grappling hook, a la Bionic Commando or Metroid. Unfortunately, it is severely underutilized in that capacity. 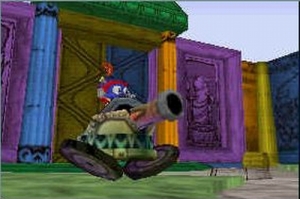 There are some flaws. One is the camera, the bane of nearly every N64 game. The camera is quite simply terrible. It seems to purposefully plant itself at the worst possible angle and fights strenuously to keep you from positioning it somewhere useful. Half of the challenge in this game is getting the camera to a place where you can see what you are doing.

Another problem, I wouldn’t quite call it a flaw because it is clearly supposed to be integral to the game’s identity, is the curios momentum and physics in the game. The world of Rocket feels somewhat like the ice stage from every game ever. Rocket is called the “Robot on Wheels,” so having him roll around seems right even if it takes quite a bit of getting used to at the beginning. It works with the physics of his tether. When your primary weapon is tossing things, how they move is an important part of the game. In Rocket things just seem to not stop when they should. If you throw something, it will bounce around for an improbable amount of time. It is different from other games and in this case, I say that is a bad thing. The physics in Rocket make me want to play a different game.

Rocket is impressive as the maiden effort of developer Sucker Punch, the company that would go on to make the Sly Cooper series and the Infamous series. There is a lot that feels like rough draft Sly Cooper in this game. It has a similar style and a very familiar raccoon character. I would say that the first Sly Cooper game is notably less ambitious than Rocket, though it is the better game. Sucker Punch displays a tendency to cram a wide variety of gameplay styles in their games, like various vehicles and the like, but keeping most of them true to the general feel of the game.

One more interesting tidbit is the fact that right up until just before its release this game was titled Sprocket, but they had to change the name due to legal threats from Hanna Barbara, the owners of The Jetsons and apparently the word sprocket.

For those with fond memories of the N64, Rocket: Robot on Wheels is definitely worth a look. While I’m not about to put it up there with the best of N64’s titles, it definitely belongs in that second rung. Would say it is just a small notch below Banjo-Kazooie, the second best platformer on the system. This is exactly the sort of hidden gem I hope to uncover in these excursions.