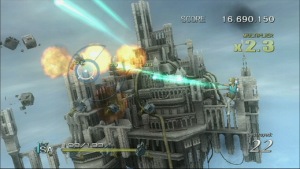 I want to love Sin & Punishment Star Successor. I liked the first game a lot; it was one of the first games I downloaded from the Wii’s Virtual Console. I loved its mix of traditional shmup gameplay with Star Fox’s 3D on-rails style, with just a dash of action game thrown in for good measure. I do love Sin & Punishment Star Successor, except for when it fails utterly at hitting a good ratio of levels to bosses, something even the worst video games seem to be able to do better than S&P.

Star Successor is sublime. It is a perfectly tuned shooter that is ideally to the system it is on. However, there is that major flaw. The game simply has way, way too many bosses.

Bosses are a staple of video games, for good reason. There is nothing quite as cathartic as taking down a towering monstrosity to cap off an arduous stage. S&P ruins this by throwing boss after boss after boss at the player. Even ignoring the mini-bosses that really barely count, most stages in this game have at least 3 full fledged bosses.

It is not that the bosses aren’t fun, many of them are. It is not that they are too hard, though I am having trouble but it is well known that I kind of suck. It is that having so many bosses ruins the flow of the games and demolishes their effect. An amazing boss in a stage is memorable, three in quick succession is numbing. It stops being “Whoa, another boss!” and becomes “Whoa, another boss?” It makes the epic encounters with gigantic foes rote rather than thrilling.

The preponderance of bosses makes me crave more of the actual stages. I know, from years and years of playing video games, that the closer I get to the end of the game — I just finished stage 4 of 7 — the amount of bosses is going to increase. I know an actual boss rush is coming. I just wish that the boss rush wasn’t a continuation of the rest of the game.