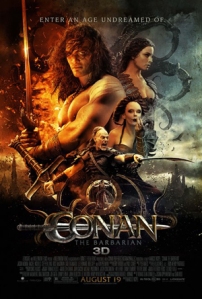 The new Conan the Barbarian movie does a lot of things right. It is a perfectly trashy, lurid, vulgar low fantasy. The movie makes no pretense of being anything else. It captures the look and feel and taste of that sort of pulp fantasy. Which makes the problems with the film a bit more devastating than they should be. There are two major flaws to Conan the Barbarian, and they nearly, but not quite sink the whole movie.

The first problem is the plot. Not the bare concept of Conan on a quest to get revenge for his father’s murder. That is exactly what a Conan movie should be about. Conan is angry and therefore must kill somebody. But how Conan goes about this doesn’t make a lot of sense. Neither does the villains actions in trying to achieve his goals. There is some nonsense with a mask that must be reassembled and is completed right at the start of the movie, but isn’t actually useful until the end of the film, 20 years later. Conan spends 20 years looking for the object of his quest despite the guy doing the exact opposite of hiding. The plot of Conan didn’t need to be complex, but it did need to make some semblance of sense. Even this wouldn’t be as big of a problem if it weren’t accentuated by the other major flaw.

The second big flaw is the length of the movie. There is nowhere near enough to the story to justify Conan’s near 2 hour running time. They could have easily trimmed 20 minutes out of this film to make it crisper and spend less time wallowing in the nonsensical plot.

It hurts all the more because lots of this movie is absolutely right. Jason Momoa as Conan is just about perfect. He is not a grim avenger, he is knows how to have fun. He is just also capable of killing just about anybody if the fancy strikes him. There is not much depth to the rest of the cast, but there doesn’t need to be. They need to fit certain archetypes, and possibly fit them in interesting ways, and get out of the way so Conan can look cool. Which he does, often.

The overall look and feel of Conan is also terrific. The world the movie inhabits is grimy and vulgar. Broken columns and abandoned cities are everywhere. Most of the people look at least somewhat feral. It is no clear place or time, but a mishmash of several. It is deliriously trashy, from Conan and pal’s parties with (ex)slave girls to the incestuous overtones of Khalar Zym’s relationship with his daughter. The swords look like the toys I played with as a kid; in no way realistic, but inherently cool. It is not a nice place, but it is an entertaining one.

There is also more than enough that is ridiculous and awesome in the movie. Just about every time Conan fights it is great. From the opening moments, which is Conan’s gruesome battlefield birth, to the end the movie is covered in blood. It spurts from relatively small wounds and explodes from men sent flying. There is a giant octopus and a plethora of over the top villain lieutenants to mutilate. Khalar Zym had his ship portaged on elephant back, though we never actually see it in the water.

In the end, the movie is too dumb and too long to be actually good. It delivers exactly what it promises, but it does not deliver it particularly well. It entertains, but not as mush as it could or should have. It doesn’t seem to have performed too well at the box office, but a sequel could easily fix all of the problems.

2 thoughts on “Conan the Barbarian Review”