Ever Oasis, the new 3DS action RPG from Grezzo and Nintendo, is a perfect summer game. It is breezy and bright and cheery. It is great for pulling out to play for twenty or thirty minutes before putting it away for the day or even the week. That makes it sound kind of slight and forgettable, but it is really just perfectly bite sized. It is a rather simple game, but that mostly works in its favor, with the games charm resting in its simplicity. 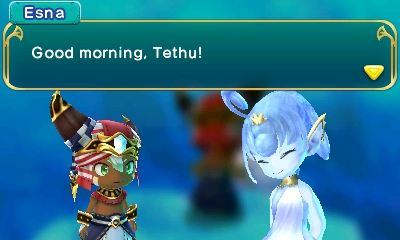 I previously compared it to Dark Cloud 2 and that comparison fits in the broad strokes. They are both action rpgs with some light dungeon puzzles and city building sim elements. But Dark Cloud is a big, meaty, complex game. It has giant dungeons to explore, several deep character building systems and involved town building sections. It does a lot of thing and does them well. While the game never really clicked for me, I am never surprised when someone tells me that it is a favorite. Ever Oasis offers a lot of the same things, but in this game they are simplified to be almost immediately graspable. There is some weapon building, but it is almost entirely linear. You use weaker weapons to forge stronger weapons, there is nothing like the complex weapons trees of Dark Cloud 2. The dungeons are compact, with easily understandable puzzles and most use the same few tools over and over. And the town building is as simple as placing buildings in a line. I could see some people craving more depth than Ever Oasis has to offer, but it gave me a taste of things I love in games without ever overwhelming me. 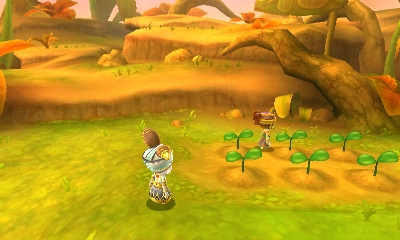 I don’t know that Dark Cloud was actually that much of an influence here. The same is true of the other PS2 RPG that it brought to mind, Radiata Stories. Ever Oasis feels like those games, but I can see stronger DNA from The Legend of Zelda, Grezzo previously remade the N64 games for the 3DS, and Secret of Mana, whose creator worked on this as well. It really feels like a synthesis of those two games, with some light town building thrown on top.

As breezy and charming as I found the game, there are parts that don’t work. The biggest problem is that the puzzle solving skills are tied to specific villagers in your oasis. Since you always have the protagonists in your 3 person party, you better hope you don’t encounter more than two types of puzzles that you need to solve. Yes, you can warp back to the oasis with the press of a button, but that takes time away from exploring. Also, some of the town business can grow tedious having to do it every day, despite how much can be automated. 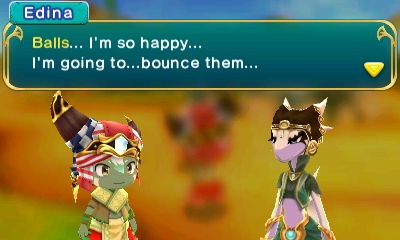 For the most part, though, the game’s charms shine through. It is helped along by bright, cheery graphics and some solid music. It is just fun to be in the world of this game. The actually fighting and exploring mechanics, while simple, are satisfying. The camera is better than most games of this sort, mostly because it uses fixed perspectives. And the story, while mostly a bright and sunny adventure, makes an excellent turn to bittersweet at the end. It isn’t too heavy or crushing, but it does finally show a little weight.

Ever Oasis isn’t a great game, but it is good enough at a enough things to be worth a look. This is a game destined to show up years from now on underrated and overlooked games lists, much like Radiata Stories and Dark Cloud 2. These sorts of games don’t really come around often enough, and I’m glad Nintendo took a chance on this in the waning days of the 3DS.

2 thoughts on “Ever Oasis”