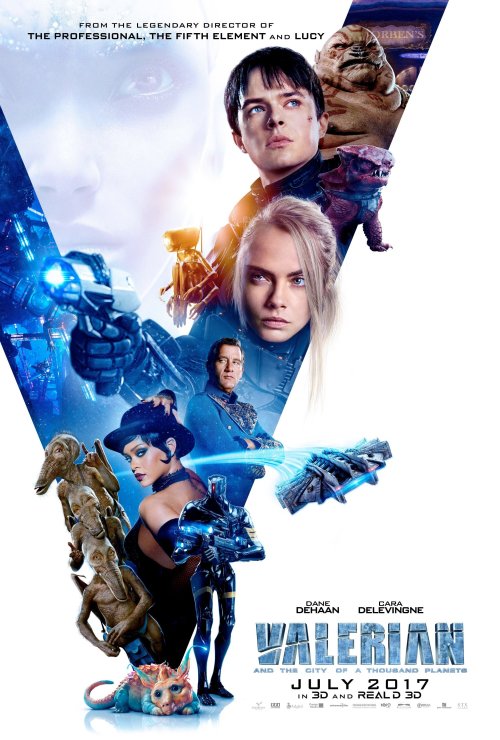 Valerian and The City of a Thousand Planets is not a movie for everybody. No movie is, but reactions to Luc Besson’s latest science fiction adventure seem to be especially divided.  It does just so happen to be a movie for me.  I loved every insane second of this glorious mess.

The complaints about this, upon reflection, are valid.  The two leads aren’t great.  I think Cara Delevingne does a pretty good job as Laureline, though she is given too little to do.  Dane Dehaan seems completely miscast as Valerian, who from his dialogue appears to be intended to be a seasoned soldier and adventurer while Dehaan looks like a teenager even though he is more than 30.  It seems slightly incongruous, and the awkward dialogue doesn’t help.  The dialogue feels like direct translations of lines written in another language.  Knowing that the movie is an adaptation of a French comic from a screenplay written by its French director leads me to believe that this is the case.  That is no excuse for a movie to sound awkward and stilted in the language all the characters are speaking.  Honestly, it rarely bothered me. Aside from some awkward phrasing, it mostly just added to the otherworldliness of it all.

There are also complaints about the plot, which fills some gaps with cliche and leaves a few other holes open, but it is mostly a straight line mystery that doesn’t do enough to disguise its obvious twists. It isn’t bad so much as episodic, with one set piece leading to another set piece, but not having those connect all that well.

I’ve laid out a pretty good explanation, I think, for why some people didn’t like this movie. Not a one of them bothered me while I was on this rollercoaster.  It starts with a mostly silent scene where a space station becomes a place for the meetings of different cultures, from various Earth based societies to eventually humans meeting alien lifeforms.  Each one builds its own addition to the space station, until it is big enough to disrupt Earth and is shot across the galaxy to find a new home.  It then cuts to an alien world, where we a given a brief look at the life of an alien society for tragedy strikes their planet.  Both of these sequences are wonderful. One is mostly just people shaking hands, but it lays across what is meant by the title so quickly and cleanly.  The other is its own mini-tragedy that is crushing yet visually amazing.

Then we finally get to our protagonists, and some leaden banter, before they go on another visually amazing adventure into another dimensional marketplace to retrieve stolen government property.  This movie runs more than 2 hours, and throughout its runtime it doesn’t go more than 15 minutes without introducing some crazy new thing.  Once they reach Alpha, the space station, Valerian and Laureline jump from section to section so fast it is hard to catch your breath.  The mystery unfolds, but it is pretty obvious who the the villain is from the moment he appears.  The only question is can our two heroes figure things out in time to prevent an inevitable tragedy.  Once the action was rolling, Dehaan’s youthful looks were not a distraction and he and Delevingne proved to be solid real elements to meet the nonsense that the movie threw at them.

There is such a sense of fun here that I was enthralled.  I wanted to see what new madness each segment of this movie could show me. It wasn’t all new, but it was all spectacular.  While it shares a lot in common with Besson’s own The Fifth Element, I also saw shades of John Carter and Flash Gordon.  Not all viewers will take those comparisons as positive things, but I think John Carter is one of the most underrated movies of the last decade and rank Flash Gordon was one of my personal favorite films.  To say that this movie reminded me of them is high praise.  This is almost exactly the kind of movie I want for Summer popcorn fare.  I loved every nonsensical second of it.

2 thoughts on “Valerian and the City of a Thousand Planets”