I’m back in school and back to only completing one book a month. I can almost guarantee to at least double this output in October; I’ve already finished one book and I am very close to finishing one that has been on my slate for more than three months now. 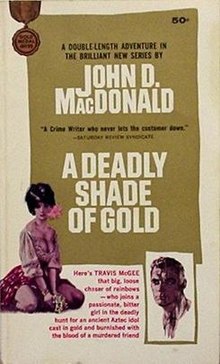 A Deadly Shade of Gold

This is the end of my MacDonald foray, probably forever. I didn’t like this much at all. It is a too long thriller that just cements my opinion about MacDonald and his inability to write women as people.

A Deadly Shade of Gold starts the same way that the other McGee book I read did, an old friend of McGee shows up and asks for help. Shortly thereafter, that friend ends up dead and McGee ends up an a quest solve the mystery of his friend’s death and possibly avenge him. The trappings of this one are so much more interesting than what it eventually becomes. His friend had a collection of golden Aztec statues that he either found or stole. McGee has one of them, but someone took the rest. Together with his friend’s ex he goes on a search that takes him to Mexico and California and deals with the Cuban Revolution. Too bad none of it is interesting.

Again, the portrayal of women is a big problem. McGee first seduces (I guess, I really don’t understand the dynamics of that scene) an art dealer to get a lead on the where the statues came from. Later, he does the same to get the use of a house in Los Angeles. There are plenty of other examples as well. It isn’t the fact of his seduction, but they play out like the most egregious scenes from Bond stories. McGee bullies and condescends, which women apparently find irresistible, even as McGee judges them for succumbing to his … charms. Each instance is off putting, the cumulative effective is pretty gross. I don’t know that I would be complaining if there was something else to focus on, but there really isn’t anything else here. It is kind of a bog standard thriller. The only remarkable part of the book is the remarkable sexism. I am out on John MacDonald.