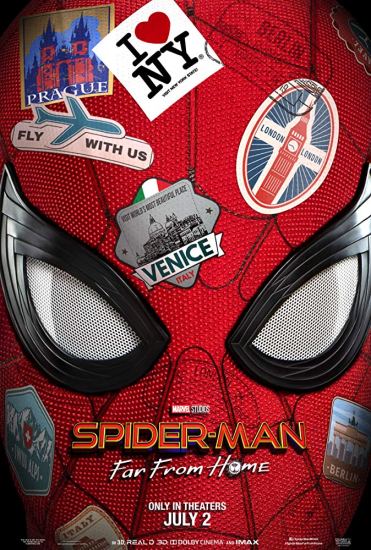 I guess I am just not as much of a Spider-Man fan as most people. I like the character well enough, but I didn’t gush over Homecoming like a lot of people did, and I certainly didn’t feel as strong about Into the Spider-Verse as many people. I enjoyed both movies, but I’d be lying if I said they had really stuck in my mind past a week or so. I think I feel the same way about Spider-Man: Far From Home. I liked it well enough; it is a solid entry in the ongoing Marvel saga. It is a coda to the story that wrapped up with Endgame, a movie that furthers Spider-Man’s adventures while dealing somewhat with the aftermath of the big movie.

One thing that is excellent is Tom Holland as Spider-Man. He does a great job of selling him as a teenager trying to do the right thing while being somewhat in over his head. His classmates are all really fun as well. Zendaya’s reveal as being MJ at the end of the last movie was groan inducing, but she is just about perfect as his love interest and eventual ally here. (To be clear: I did not like the end of movie call me MJ moment; Zendaya is great. It is the same problem as with The Dark Knight Rises’ Robin bit at the end. Don’t do that crap; just have the character be the character the whole movie.) Jake Gyllenhal mostly makes Mysterio work, though he remains kind of an empty shell of a character at the end, with his motives and personality largely just gaps that were never filled in.

One thing I haven’t liked with the current iteration of Spider-Man is making him Iron Man’s side-kick. Which is exactly what he has been in every MCU movie so far. The dynamic works well enough; I think DC should take notes for their next Batman movie and any attempt to integrate Robin. But to me it takes away from Spider-Man some. The fact that he is on his own is part of the appeal. Sure, in the comics he gets help from various sources, like the Fantastic Four, but the fact that he was the young hero that was not a side-kick always seemed to me to be a key element of his popularity.

Far From Home pushes Spider-Man’s limits. The first movie was all about Peter accepting his role as the friendly neighborhood Spider-Man; this movie pushes him immediately out of that neighborhood. The world has changed since he fought Vulture and Peter has to change with it. I just don’t know that this movie really works on the macro level. Him dealing with the legacy of Tony Stark doesn’t really feel like Peter’s responsibility. It only happens because Tony was apparently a mad man, creating tons of weaponized drones with few safety features. Nick Fury and the agents formerly known as SHIELD are so out of place I thought they were part of Mysterio’s illusion.

Stronger are the parts that deal with Peter’s personal life. His struggles to admit his feelings for MJ and his struggles with keeping his identity secret are both great Spider-Man stuff. That is what I wanted to see more of.

My complaints from a few years ago about MCU movies being all polish and not substance kind of went away for a bit, but that is exactly what this movie feels like. It feels polished to the point where it loses a lot of its personality. I don’t hate, I liked it, but it feels a lot like one of those MCU movies that people are going to forget exists in a few years, only coming up when someone throws is smack dab in the middle of Marvel movie ranking. Bring on the next phase.

One thought on “Spider-Man Far From Home”