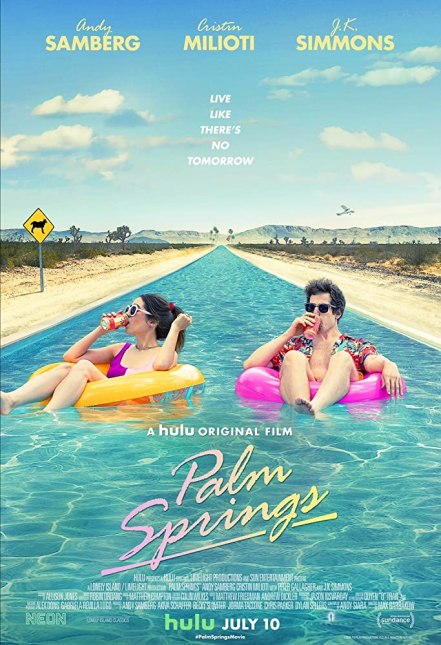 Comedies seem to have become a hard sale lately. I can think of few recent ones that are legitimately good, and even those are either not strictly comedies or actually commercial failures. While I don’t know how Palm Springs did commercially, being a direct to hulu release, it is certainly one of the best comedies I’ve seen in some time.

Although Palm Springs uses a similar time loop concept to Groundhog’s Day, it takes things in significantly different directions. Groundhog’s Day is a cosmic morality lesson; he is trapped in the loop until he becomes a better person and earns his release. Palm Springs is more of a science experiment; no amount of self-betterment will free them from the loop; only understanding the nature of reality and crafting an experiment to get out of it. Compared to Groundhog Day, Palm Springs’s characters are more aware of the kind of story they are in. By the time the movie has started, Nyles is already trapped in the loop. Even he can’t remember how long he has been stuck there. But he has tried a bunch of ways to end the loop, failed, and resigned himself to solipsistic nihilism.

Palm Springs is largely a two-hander. Andy Samberg plays something not too far from his usual goofball character. He charms his way through the movie, appearing frivolous but not stupid. His counterpart is Cristin Milioti, best known to me for playing tragic, yet supportive wives on tv shows, as Sarah, the sister of the bride at the wedding that is every day. Here, she proves every bit a match for Samberg in both the comedy and the romance. He is already defeated at the start of the movie, using the repeating wedding as a playground to satisfy is every absurd whim. Sarah is the more dynamic character, going from disbelief to attempted escape to resignation, to renewed determination. Her desperation has more poignance than Nyles’. He is an interloper at this wedding, she is there for her too perfect sister, waking up to her greatest failure of a person every morning, not able to move on. The chemistry between the two of them is also excellent. You see what draws them to each other, and also what splits them up in the usual rom-com third act separation. Palm Springs feels both very familiar and also delightfully original. Combined with winning central performances, it results in a very entertaining movie.

While other attendees of the wedding filter in and out of the film, the biggest role outside of the protagonists is JK Simmons as Roy, who adds another layer to the already complex time loop problem. He is alternately scary and fatherly, with his own perspective on the predicament Nyles and Sarah face.

The humor in Palm Springs tends to the dark, despite the bright color palette. The movie deals with hopelessness and despair, and mines that for laughs that sometimes hurt. That lack of hope leads to the characters to do reprehensible things, to just treat the world like a pointless playground. And that sort of attitude is funny for a while, but the movie maintains its humor while also showing the emptiness of it.

Palm Springs is not an especially complex or profound movie. What it is is charming, well considered and outright funny. It is the perfect antidote to quarantine.